So we pick this up with circa 280 men and circa 4 women on circa 5 coaches heading to circa god knows where in the pouring rain.  I attempted to film inside the coach...with the camera the size it was and the French coach driver obviously being a former coach drifting champion or so it would seem...trying to do so was akin to  giving a tarantula a leg wax...near impossible.

Andy and I had joined the coach with the pirates on...This meant pirate songs and 'Aaaaars' most of the way.

It was also the coach with head snozzwanger Kev on board...My heart sank when I saw him. Not because I don't love the nutter, but because in '11 when I was on a coach with him in Prague (next to him no less) he decided it was the perfect moment to let loose a weapon of nasal destruction (stink bomb)

As luck would have it he appeared not to be armed so this time and my nose receptors survived the journey.

The destination of our evening frivolities was supposedly round the corner from the camp site. The coach driver must have been going via belgium for a waffle or something as it seemed to take forever...but once arrived we were parked up in a car park and discarded into the French habitat.

What we were faced with next was tricky for your average braincell lacking scumrunner...a choice.

Hither was a bowling alley, thither was a selection of restaurants and yonder was a discotheque.

So picture the scene, 280 men and 4 women wandering around like drunkard lemmings staggering like running on an 8086 (nerd joke) making grunting noises at each other looking for various forms of haggered flesh to devour. All with a look of puzzled bewilderment. It was less a banging party at this point and more like night of the living dead.  Throw in the fact that we'd all been sat in cars for 18 hours and the analogy rings true.

The confusion was mainly down to a syndrome that I have now decided is called 'otherthanpotnoodleorhamandcheeseroll-itis' where a scumrunner is offered a myriad of food opportunities not usually expected in its natural habitat. Their was a steak house, a Chinois restaurant (no its not a typo you uneducated cretin), A pizzeria and I believe a curry house somewhere also.

We opted for dead cow...

After some overly polite queue jumping from the gentlemanly klongbangers...oh we didn't mind they were so dapper and proper it just for a second felt like the honourable Actuarius had appeared.  We were also in the company of the Snozz, the Speedy Sparkies and later on the Gavlar lad-ies amongst a few other teams.

The food was good, far too good for us lot...then I realised later on that we had pretty much taken over the whole joint. Well...what can I say, 2 trannies, 5 cavemen and a film crew walk in and quite frankly if I was a local I'd be out of there quicker than gok wan in a cupboard shop.

What I had also realised by now was that I had consumed quite a lot of beer. I'm a light weight when it comes to our pale ale friend and this made for some interesting footage later in the evening.

We headed to 'le club' which was about 200 yards away. We came across a slightly inebriated Ed (Mr Scumrun) on route by the entrance to the bowling alley. He shouted something about some guy called zane or zed or ned or shed or something who worked at the club and said to ask for him if we had any issues.

Then something very comedy happened.

Another picture the scene moment, I stagger up to a 9 foot bouncer with a massive video camera on my shoulder (so it was pointed at his balls) he stops me and says 'oi, non, what is this, video, non' pointing at the camera. Well of course, why wouldnt you take a massive camera clubbing with you, everyone does don't they? no, ok will here I proved the power of scumrun...

I merely lifted up my scumrun competitor lanyard and said, I'm official mate.

He couldnt back track quick enough, "of course, head right in" he virtually bowed (so the camera was now pointed at his 12 pack.

So we headed inside looking for beer, women, and quality tunes...

We headed up the stairs and it opened up into a bosom of blue lighting, smoke and flashing strobes. It looked like a good setup, their were some hotties behind the bar who gave me a knowing smile...'sorry luv, must have been a different camera man for that film sweety'

Was looking good until I focused the lens on the centre of the dance floor.

What I saw disturbed me...forever...

This was what it looked like when Batman took to the dance floor in plain clothes.

I filmed him for a short time. He seemed to be enjoying the limelight so much I just pretended to film him for much much longer. 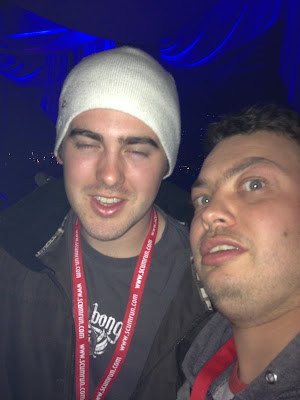 After 30 disturbing minutes some more people arrived, and then some locals, then more runners, then more locals. We were admiring some of the female attendees on the dance floor who appeared to be most compliant in this very obvious meat market arrangement when Nessa turned to me and said "we've been stitched up" now when a Transvestite Nessa lookalike says that to you, you tend to immediately think a combination of 'really? that must have hurt' and 'that's maybe taking the theme and outfit just a touch too far' until she then followed with "look around the bar area" so I did...

What I saw made it quite apparent what he was getting at...

Many young men in tight white t's and very riplous abdomini effectively posing...to each other.

"This is a gay club"

I think he may have had a point.

So the Scumrunners did what any straight group of inconspicuous alpha males would do in this situation...

This then progressed to wheel barrow races across a (packed with locals) dance floor, accompanied with podium dancing and all-together total embracement of the spirit of the evening.

Only other thing of note that night was apparently their was some kind of riot going on outside the club, the 12 foot bouncers (id had another beer by then) were wielding pepper spray and telling us to stay inside and wait for our taxi.  We didn't really see much of it but we were tempted to throw Nessa and Stacey into the mix just to see the confusion on their faces...'my gang rules' 'no my gang rules' 'hello boys'

We got back to the camp site around 2.30am (we were some of the first back it seemed) crashed into the tent and were content that we had had a top evening.