Ok people, been keeping this one under my hat until the time comes, but alas like the words of the great agent smith 'it is inevitable' that time moves on and tomorrow I am taking the bug for a bit of a 'touch up'

Here is the design that the graphics company 'graffiti4hire' have sent me... 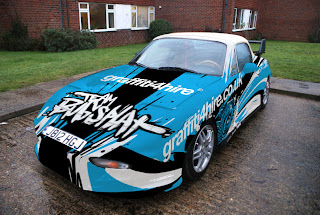 Subtle I know! Im fascinated by what is going to happen tomorrow. I have been talking to one of the guys by email and he thinks it can be done in a day, so ill be sure to upload a photo of the finished thing...

I have been having some troubles in the preparation department though.

sanding... I attacked the car with some fine grain wet and dry to 'key it' tonight, however I failed to consider the implications of the minus temperatures outside. so instead of a nice even sanding down of the bodywork I proceeded to smear a thin layer of instantaneously frozen ice over the entire car body....

I removed the badges and trim etc with a screw driver, only mildly snapping most of them in the process.

You see due to my busy schedule (break out the violins again) ive just not had time to spend preparing the car properly so im hoping the little ive done will suffice.

Ive borrowed the good camera from work so I'll be sure to make a little video for the site also. I do know how much you enjoy them.

so if you see this thing coming back down the m40 tomorrow night be sure to point and laugh at me along with everyone else...

but secretly you know you'd rather be driving it...
Written by Joe Richardson No comments: Links to this post

The Bug has an MOT hoorah - oh and some graphical updates

Enough of the waffling, Here is how the whole MOT accruing experience went.

I use a garage called fox's in guildford. Primarily because its a 2 minute walk from where I live meaning transport is easy, secondly because they openly mock my somewhat ridiculous car for its ride height and general 'Fast goes mildly furious in a tea cup' look. They are yet to rip me off or give me back the car in a worse condition than when I gave it to them, which has been known with several other less reputable outfits in this area.

I drove it down to the garage and immediately made a good impression by scraping it along every nook and cranny their driveway had to offer. On handing the keys over they were professionalism personified and could not be more helpful if they tried.  Remember I said that.

So off I went, walking back up the hill and then hopping in my decidedly more reliable, less interesting, more weighty but technologically less likely to throw a tantrum half way around any given corner, Citroen C4 and went to work.

What happened at work is their business...plus I can't really remember.

I took the view that harassing the garage would only make matters worse and therefore left it until 3.45pm that day to mildly sniff the fox's arse, ready to kiss it full heartedly if the need arised.  The phone call was actually not as bad as expected. Highlights were, it failed. Now let's be honest, you don't put an 18 year old modified car that has spent half the year sideways or trying to be, in for an MOT and expect a clean sweep now do you?

Well I wasn't disappointed, it failed on a brake line that was corroding, a blowing exhaust and a somewhat hard to explain CO reading that was 250% over the legal limit.

My personal explanation for these three afflictions are:

Brake line - that is a simple one, I don't use the brakes enough. Even on the Nurburgring where everyone kept telling me I would cook my brakes and need to fix them post 'rag', I proved them wrong, the 'green stuff'' pads and Brembo discs are still beautiful and have plenty of life left in them, the pads have been on there for 2 years and did not even bring up an advisory. A certain recommendation. Of course there isn't a huge amount of car to stop. I have rarely seen 'big brake' conversions put on MX5s, it's just unnecessary.

The Blowing Exhaust - That's another easy one caused by my own fair hands. Anyone who remembers the 'other back box' I have for the car will be glad that I swapped it to this quieter version. Apparently I didnt use enough gun gum in the swapping procedure hence the blow. Ne'er mind now I have the MOT the crazy blow pipe can be refitted and it won't matter two hoots that couldn't be heard anyway.

The CO reading - Now this one is shrouded in mystery. Long story short last year it failed at the same the garage on the same thing. They deduced it was a temperature sensor. My deduction was that the fwapping great Apexi induction kit was throwing the induction / exhaust loop / ECU / Fuel Air Mix into all manor of spanner inserting crazyness. They replaced the sensor and said it then went through ok. hmmm.  All sounds legit until it failed this year with almost identically high reading! ah well they "managed to get it through by playing about with it a bit". Not complaining.

So that's it. It now has an MOT and mechanically is almost ready for the next rally which is looming like the stay puff marshmallow man at a Ghostbusters convention.

I have struck up a deal with a reputable birmingham company who is going to do something rather special I hope. watch this space is all I can say...

What is this? I hear you cry!

Well I will be perfectly honest with you people, and by people I am referring to my good self and perhaps my wingman David and the few other lunatics that take time to read this. As I was saying I will be perfectly honest, I am not entirely sure what I am going to put here, but it will no doubt be ramblings about preparation for the rally, combined with odd modifications to the car combined with musings about my humble existence.

Firstly I feel some explanation is in order. My name is Joe and I am the leader of a humble band of people we affectionately call Team Bugsplat.  Way back when in the times when people had money and the banks hadn't put the price of petrol up (or some other misunderstood hypothesis about stuff I avoid caring about) it was the year of 2007. 4 years you say? this is merely a moment of time in the cosmic scale of things, a mere squirt of unleaded mid corner to correct the sliding in the combustion engine of the cosmos, but 4 years, this 4 years has been a lifetime for moi.

Now it is early January and I am starting major preparations for the 3rd rally in our illustrious career. The event? The Scumrun. An annual rally with 100+ teams hurtle across Europe to an unknown destination, all in the name of a childrens charity (mayte) 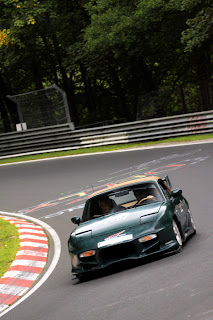 If you've come through our website then you'll have seen 'the bug' as we call her or 'cassandra' as my wife calls her. She is a 1992 Mazda MX5 1.6. Now for the science bit, concentrate...

Its great fun to drive as we recently showed at the Nurburgring on the 'Rag the ring' event organised by the scrumrun organisers. Even in the pouring rain she performed awesomely and somewhat scarily. Had a few twitchy moments but she let me bring her back in line like a well behaved ex andrex puppy at crufts.

Today I have kicked off the main drive for personal donations and sponsors. So far ive managed to get my work to sponsor me and one very kind gent I used to work with but hoping for big take up as time gets closer.

One of the other areas I am looking at is graphics for the car, been asking around and may have found some options with regards to crazy effects but ill keep them up my sleeve for the moment in case none of them come to fruition.

So that's it, my first post. Apologies if its been a big let down, Ill do more to ensure that I have something worth saying for the next entry...and even if I don't I can't imagine many people would read this anyway. 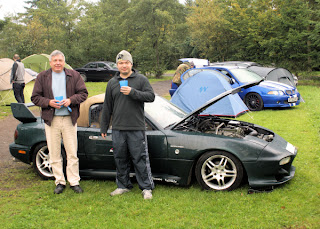 Joe - Team Bugsplat
Written by Joe Richardson No comments: Links to this post